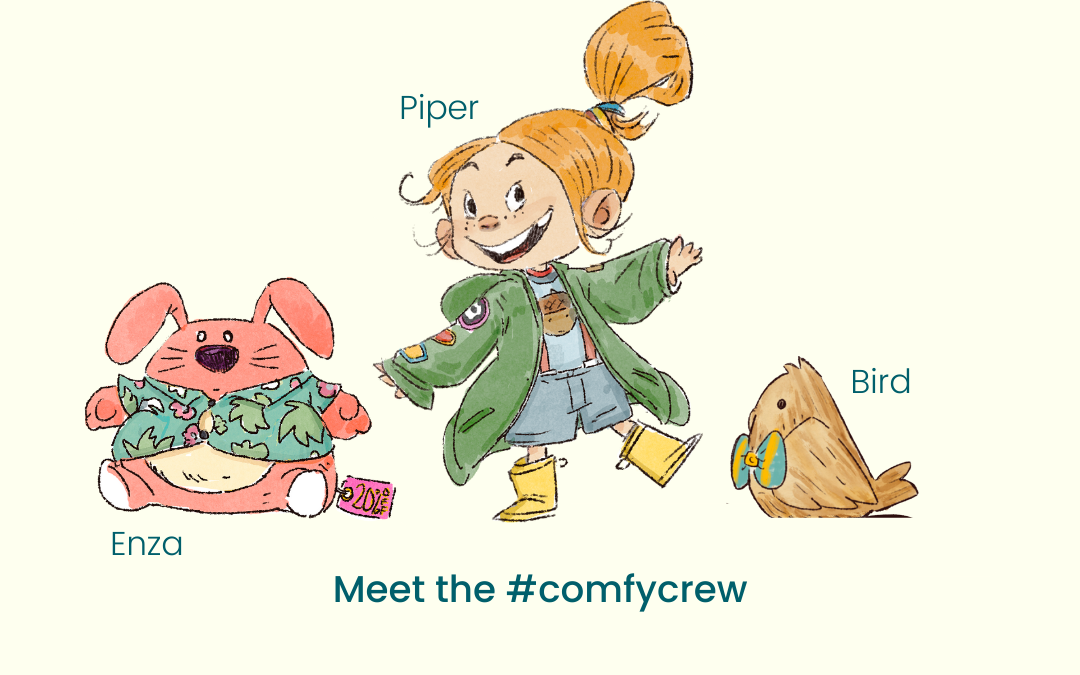 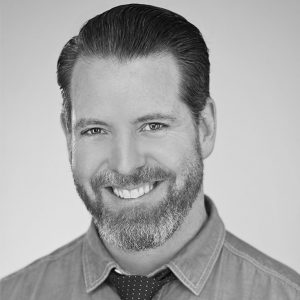 Jon-Barrett Ingels is a man of many talents – a writer, producer, actor, filmmaker, and podcast host and producer. He’s also a proud father to two children. Ingels currently works in development, creating television and streaming series, miniseries, and feature films, and is part of the storytelling team bringing Piper + Enza to life! In this post, he introduces the #comfycrew—the three central characters telling the Piper + Enza story.

In the early creative stages of Piper + Enza, we knew there had to be a voice, a character who would carry our stories and be the perfect conduit from everything we learned from our child life experts to the parents and young readers we were targeting. We wanted an empathetic friend for kids to connect to and feel comfortable sharing stories with. We are all parents at Piper + Enza, and a lot of us have daughters with big imaginations.

Piper quickly became our conduit, our storyteller. Through her, we can share stories that maybe sometimes grow a little larger than life, but always remind our audience that they are not alone. She lets children know that  whatever it is they are experiencing, other kids are out there who have experienced the same thing, and it’s going to be ok. 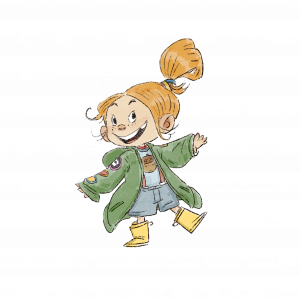 If you had a friend like Piper growing up, consider yourself lucky. Her “job” is to listen, to help, and to comfort.  She’s been through it (or knows someone who has) so she can give the best advice, the best remedies, the best care a friend could give. Piper is so Piper, and there is no one else in the world she would rather be (except an ice cream man, the most noblest of professions).

Piper knows there are a lot of things to be scared of in this world: jello (she doesn’t trust it), brussels sprouts (alien eggs), and one day having to shave like daddy (bodies make hair for a reason), but a doctor should not scare you. They are experts and went to school for practically their whole life. They know what they are doing.

Piper is six and in the first grade. Last year, she spent three days in the hospital with the flu. It was scary, but there were so many people helping her and checking on her and making sure she got better. And they were all super smart. Piper learned a lot during her stay, asking everyone who came to her room a million questions. Now, she feels it is her turn to help. Whenever a friend is sick, or scared, or has questions about doctors, Piper is there with a story.

Piper isn’t the only character sharing stories. We wanted to explore some of the fears that may come up when thinking about doctors, and shots, and getting sick, and some of the irrational places those fears can lead. Piper does not operate from a place of fear, but her friend, Enza, tends to imagine the worst case scenarios they may have to face. 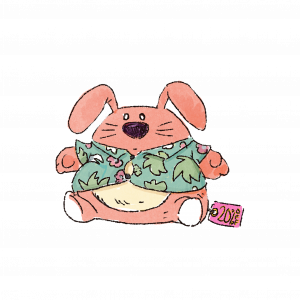 Enza was a “brand new” stuffed animal for four years. Starting at the Honolulu International Airport gift shop, they were later donated to a Children’s Hospital gift shop in Southern California where their role of “Gift Shop Security” changed to “Piper’s Secret Service.” Enza is the squishiest, comfiest, coolest, fat bunny in the whole wide world.

Enza is earnest. They are who they believe they are, not who others think they are. If you asked Enza what their favorite food is, they’d say “Banana Bread!” if you asked why, they’d say, “Because I hate bananas!”

They are loyal. Enza may have been designed for tourists shopping at the Hawaii airport gift shop, but they never let that discount tag affect their loyalty, “I might be 20% off, but I’m 100% with you.”

They are… brave… well… maybe…

They are not scared, they just become aware of the danger before it even exists, even if it doesn’t exist. And they are ready to face it, if they have to, but hopefully they won’t have to … do they have to?

Enza is a toy with an overactive imagination. Their adventures exist only in Enza’s head. Piper is completely unaware of the rich fantasy world constantly taking over Enza. To her, Enza is a companion. To Enza, they are the protector of Piper.

Piper found Enza in the hospital gift shop after she was discharged. They were stuck in a corner on the top shelf with a discount tag. She needed to rescue Enza (Enza believed it was the other way around). Piper wasn’t able to say “influenza” and that is how Enza got their name.

Our third character is Bird, the soul of our series. Bird is not a storyteller. They are the listeners of stories, of secrets, of fears, and fantasies. They are along for the ride and always by your side. We wanted to create something that would be a transitional item from our stories to the real world. We quickly found the concept of “Comfort Birds,” carved wooden birds made for people in distress, who have experienced trauma, or who are isolated. We wanted to translate that concept to a kid friendly character who would be shared between friends, offering comfort and companionship during challenging situations. 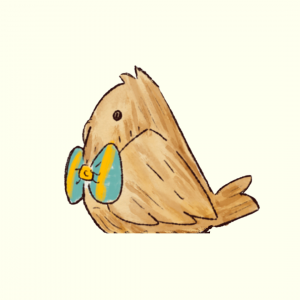 When Gram and Gramps made Piper a wooden bird, she thought, “That’s pretty cool.” She didn’t know Bird would have the soul of the greatest sax player ever. Her sister came up with that story. Bird became so much cooler.

Bird is not a toy. Bird is a companion. The kind of friend you can talk to for hours and they stay silent, listening, understanding, with a look of recognition. Bird’s been there, they can relate.

Bird is smooth, slick, cool, a trend setter without even trying.

Piper’s stay in the hospital was traumatic for those around her. Her fever spiked to 104º and she couldn’t hold anything down. Her Gram wanted to give one of her carved wooden birds to keep her company. Gramps wanted to give the bird personality so he put a bowtie on the figure. Bird was complete. They stayed in Piper’s bed throughout her hospital stay, and traveled with her everyday after.

These three characters make up our #comfycrew, and the window through which readers will experience the world we’re excited to share with you, a world that celebrates every kid’s health and wellness journey and aims to build knowledge, confidence, and understanding—all while making you smile the whole way through.