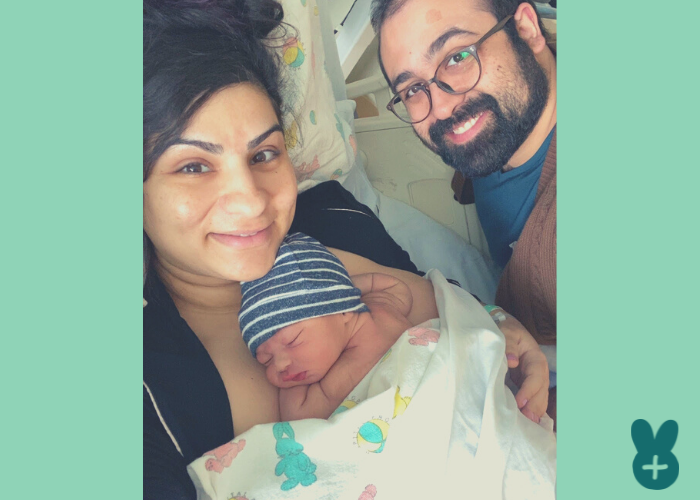 How Fatherhood Changed the Way I Work with Patients: A Child Neurology Resident’s Story

Dr. Mellad Khoshnood is a Child Neurology Resident at a Los Angeles-area children’s hospital and in training to become a child neurologist. Currently, he works with kids (extreme preemie to adolescent) who have epilepsy, movement disorders, headaches, tumors, autism, metabolic disorders, demyelinating disorders, and more. He is also a brand new father to son Razi, born March 2021. He is Piper + Enza’s newest contributor, and in this post, he shares how fatherhood changed the way he works with patients, and why he feels families need better access to medical information so they can advocate for their child.

As a physician focused on pediatric neurology, you must be accustomed to working with families facing difficult or even insurmountable circumstances. What is your approach to working with these parents? What tools can you give them to best support their child?

I’ve come to appreciate that any sort of disease or deviation from a perceived “normal” can be terrifying and world-altering. Often, even a benign diagnosis can be something that parents struggle with. It’s not to say that their fears are invalid if the condition is more benign, but it’s the fear of the unknown and the fact that it impacts their child. A big part of that struggle is the sense that they’re alone or that this is somehow their fault. I do my best to stay up-to-date on parent and patient support groups to offer to families, as well as appropriate informational venues.

Beyond that, I tend to try and offer as much time as possible for parents to ask whatever questions they have regarding a diagnosis. I’ve found letting them ask their questions still lets me get all the important information out, but also gives them the space to ask whatever questions are really on their mind. I’m at a place now where I automatically discuss why a diagnosis is, and will always include something about how it’s not the parents fault. This tends to be something parents are thinking about but don’t express, and I find that telling them preemptively helps prevent guilt or a sense of failure. This is all with the goal of giving them as much control as possible in what’s going on with their child, and helps to ensure trust.

A big thing I tell families is not to Google things—not because I’m trying to hide something, but because each disease can have variable presentations and impacts on a child, and I want to make sure the information they get is tailored to their child.

How has your approach and perspective shifted since becoming a parent yourself?

I must admit, I found the notion of the rare and esoteric diagnosis very thrilling before. Since becoming a parent, I loathe making such diagnoses. To that end, I try my best to give parents as honest of an outlook as I can.

Razi was admitted to the hospital around 8 weeks old. He ended up being perfectly fine, but there was an extreme amount of stress in my wife Teeba and I, for different reasons. I found myself questioning all of the tests and studies and reasoning, because they didn’t make full sense to me. I won’t lie, I was very angry throughout the process, and this is as a physician.

So whenever I have parents who begin to wonder why we are or are not getting tests, I make sure to spend time understanding why. If we aren’t on the same page, I try explaining it in a different way until they are in agreement or we come up with a reasonable alternative plan. There are times I put my foot down, but I find that this helps to garner better adherence for treatments and workup. I’ve found children are also less hesitant to engage with me when their parents are more friendly with me too, which always helps.

On a lighter note, I’ve come to realize the things I think are the most important to talk about often are different than what the parents are concerned with. A prime example is the “eye goopies” babies have. Razi has them, and I’m constantly (literally every hour sometimes) trying to clean them up. I remember distinctly waving away such concerns from parents as a general pediatrics resident.

How do you feel that families can benefit from having easier access to science-backed resources focused on health and wellness for kids, like what Piper + Enza is working to provide?

I have worked with parents who care for children with diseases so rare that there are only a handful of such cases that we know about in the world. Those parents often know more than most physicians about these conditions. On the flip side, I’ve cared for parents who are unable to explain the simplest part of their child’s history, not for a lack of interest, but rather, because they were never given the information.

One case in particular was a child who came to me for epilepsy missing half of his brain. His mother had no idea, was never shown his MRI, and was just told he would never walk or talk (he does both). The common thread I find is that if you give them the information they need, they use it to advocate for their child. And at the end of the day, that’s why we practice medicine—for the child.

Unfortunately, access to care is a very variable thing in this country. Add to that the difficulty of explaining some complex medical problems in lay terms, and you have a system where it’s very easy for families not to have any idea what’s going on. Just like children who have speech delays have more tantrums or struggle to engage, I find when parents don’t understand what’s going on, they are often labeled as “difficult” or “disengaged.” In reality, they just don’t know how to participate in their child’s care because we as physicians didn’t do our part to inform them and empower them.